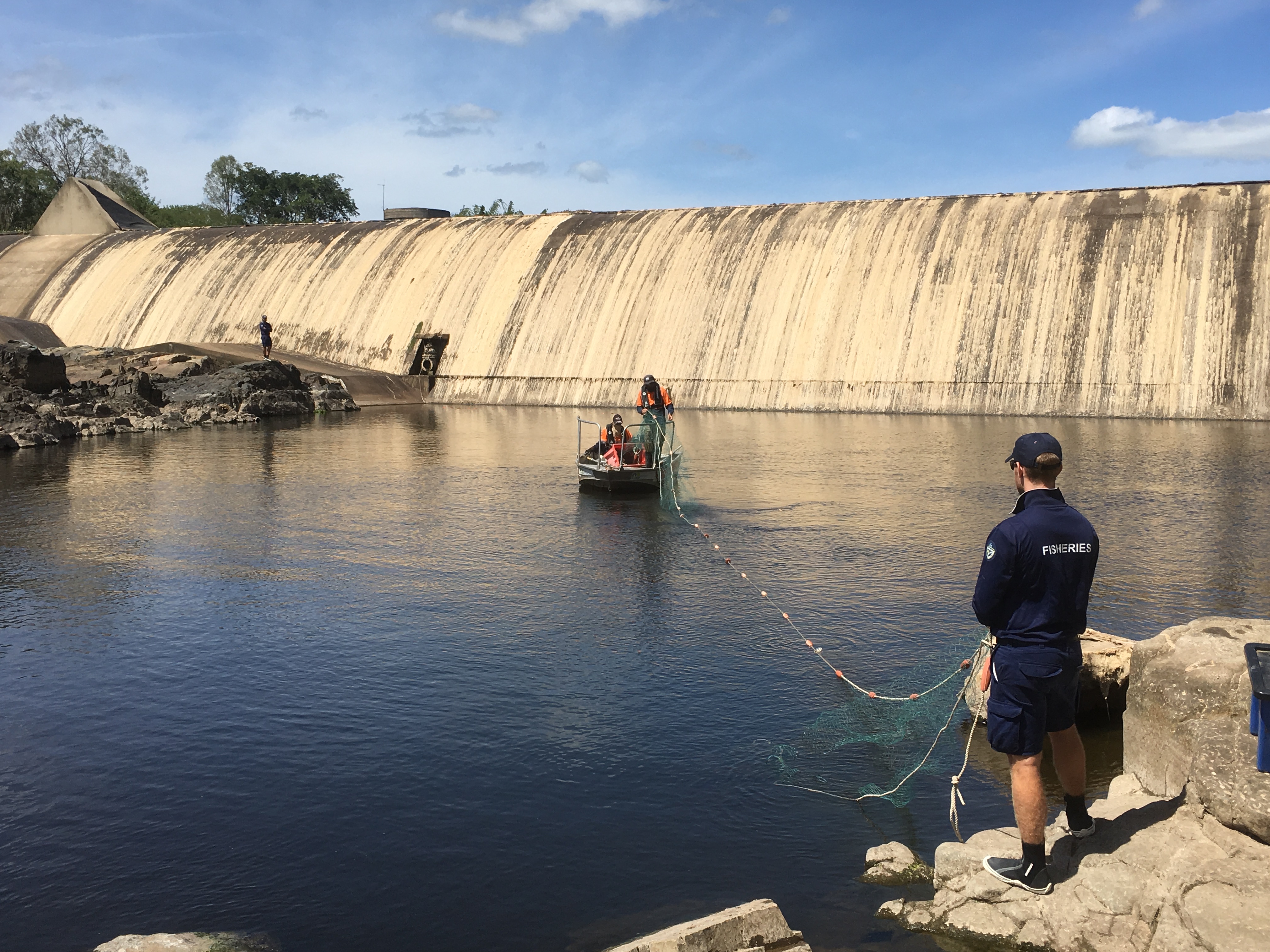 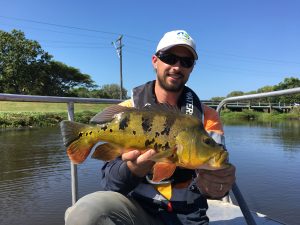 The discovery of a second infestation revealed that peacock bass were more widespread than first thought.

Twelve months ago a young fisherman took a photo of himself at Mackay’s Dumbleton Weir holding up his catch.

He had never seen anything like it before and thought it might be a rare species.   So once the happy snap was taken he released it back into the Pioneer River.

What he didn’t know was that he just recorded the first ever Peacock Bass caught in an Australian waterway.

When he shared the catch on social media the recreational anglers across the region were horrified.

Unbeknown to the angler, if not stopped, then the predator he released back into the river threatened to wipe out all the native fish in the catchment.

Tracking the spread of Peacock Bass

In response to the photograph scientists electrofished around Dumbarton Weir to see how much the predator had spread.

The good news was there was a healthy number of native fish.   The bad news was they didn’t find the one fish they knew was in the river.

But finding so many native species gave anglers cautious optimism that it was an isolated case.  It was short lived.

Two peacock bass were caught last month in the Gooseponds, a sub catchment of the Pioneer River.

Now scientists, with the help of Mackay Recreational Fishers Alliance (MRFA), are scrambling to hunt down the pest fish.

Catchment Solutions (CS) fisheries ecologist Matt Moore said the fish needed to be eradicated before getting a foothold.

“Right now intensive sampling is needed, we have to go now.  There was two in the Gooseponds in different location. We have to get out there quickly and find out exactly where they are,” he said.

“Time is of the essence.

It’s almost impossible to eradicate pest fish.  The only chance you have got to eradicate them is soon after they’re discovered.

Mr Moore and the CS team knows how difficult it is to irradiate pest fish after years battling the tilapia threat.

In 2014, the CS team trapped a tilapia in the Gooseponds.  The species had already infested some river systems in Queensland, but it was never in the Pioneer River.

After electrofishing they discovered the tilapia were widespread in the Gooseponds.  So concerning was the discovery of tilapia, that they considered that radical idea of poisoning the waterway.

Ultimately it was decided to release hundreds of juvenile barramundi to feed on the pests.  The attempt failed because a flood the following year spread the pest outside the potential containment area.

Peacock bass is an aggressive predator that only eats other fish.  It’s a direct threat to the native species that move into freshwater for part of their breeding cycle.

“(Peacock bass) are a voracious predator.  They will eat anything,” Mr Moore said.

“(Predators) have acid in their guts so they can break it (food) down quickly and keep eating.”

He said they also reach sexual maturity ”extremely fast” with males maturing in one year and females in two years.

How dangerous are peacock bass?

A scientific study of the impact of introduced peacock bass in Brazil’s Rosana Reservoir and upper Paraná River revealed that native populations in the two waterways collapsed.

The density of native species declined by 95% in only a few years of the introduction of peacock bass. Some small species disappeared completely.

Ironically bass were introduced in Florida in the 1970s to control other aquarium species in the marine ecosystem.  Unfortunately the bass spread rapidly and now dominates the ecosystems where it’s found.

For Florida anglers it has become a sort-after trophy.  It even attracted tourists looking to bag the apex predator that had a reputation as an aggressive fighter.

But according to MRFA president John Bennett, any potential gain from the species’ introduction was not worth what would be loss.

“We don’t need the peacock bass.  There is barramundi, we’ve got the threadfin salmon and the mangrove jack.   We have got so many fish that tick the box (of sought after trophies) that are Australian natives,” Mr Bennett said.

“We don’t want to put that fishery at risk.  This is going to have long-term devastating impact on the whole Queensland coast ecosystem with its fishery.

“Of the ten most invasive species these fish are up there.”

Mr Bennett said it has been a steep learning curve to understand how the introduction of peacock bass would affect the waterways around Mackay.

“Eighteen months ago I didn’t even know what a peacock bass was.  But when the invasive species flag gets raised, that lifts out interest level considerably considering the tilapia problem in the last four or five years,’’ he said.

‘’We are concerned about the aggressive nature of these peacock bass.

“They (native species) go to the billabongs to breed for the relative security and safety.  If you have an aggressive fish like this bass in the billabong, the recruitment numbers (of native fish) are going to be significantly lower.’’

Just how many peacock bass are in the Pioneer River’s freshwater is unclear, but if unchecked it won’t take long for an infestation.

Scientists are doing sampling to determine the extent of the problem, while MRFA has put a bounty on their heads.

MRFA has offered anglers $50 vouchers for every dead peacock bass more than 30cm.

“We talked to a couple of small businesses who will be impacted.  Everyone waits for the government to try and fix something, but the cogs turn too slowly,” Mr Bennett said.

The first peacock bass caught in the wild in Australia was at Dumbleton Weir on the Pioneer River.

“Ïf we get those adult fish then they won’t come back.”

As far as MRFA was concern, the bounty on offer was money well spent.  The appearance of peacock bass could unravel the work to grow Mackay’s reputation as a fishing destination.

MRFA spent years campaigning for and then championing a net-fee zone, increasing participation in recreational fishing and developing a fishing strategy with the Mackay Regional Council to attract tourists.

“We are going to be put on the map for the wrong reasons, not for the good work we are doing… the net-free zone, encouraging recreational fishing or the net-free zone data collection,” Mr Bennett said.

“Mackay has the highest fishing participation rate in Queensland and the highest boat registration per capita.  Fishing is what we do… to have this thing here (peacock bass) is just devastating.”

The fishing community has answered the call with thousands of people responding to a social media post committing to fishing for the pest.  Days after the bounty was announced dozen of anglers were at the Gooseponds trying to snag a peacock bass or tilapia.

When an anglers take a peacock bass to claim the bounty, the details of where and how the fish was caught is recorded and the specimen is taken away for DNA testing to determine its origin.

“This is citizen science at its best,” Mr Bennett said.

No fish were turned in after the first weekend of the bounty.

Anglers and scientists are responding to the threat quickly, but they are in for a fight not just to the threat now but also in the future.

What’s next for the fisheries?

The Peacock Bass is not only a trophy fish for anglers, it’s also a prized fish for aquariums.

According to Federal Department of Agriculture and Water Resources, it was prohibited to import Peacock Bass. But despite the ban, there are already many bass in Australian aquariums that are breed and sold.

A mature peacock bass can fetch hundred of dollars on online auction sites.  It’s their financial value and reputation with anglers that has Mackay fishing groups worried.

Mr Moore said unscrupulous people will release them in dams if you put a value on them.

Tilapia were able to spread to nearby estuaries because its tolerance of salt water, but peacock bass is solely a freshwater fish and survives in warmer waters.  Unfortunately North Queensland is the perfect environment for these tropical species popular in aquariums.

It might be too late for the Pioneer River, but Mr Moore said human intervention was the most likely way peacock bass would spread to other catchments.

Mr Bennett said it’s people’s ignorance of the potential damage that could lead to it infesting other waterways.

“There is a generation of young sports fisherman, young kids, that idolize these (peacock bass) fish as a trophy fish.  If you look at some of the comments on social media I don’t think they (people) are giving it the seriousness that it needs,” he said.

He said it would have a devastating impact on northern Australia fisheries if it spread.